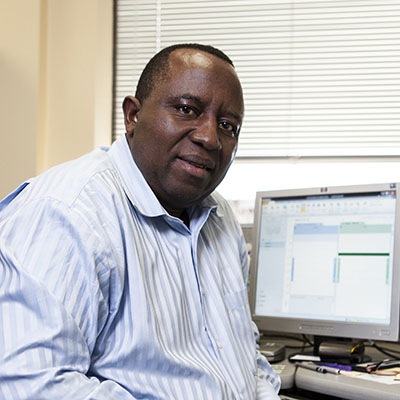 It was a long road from Simon Mutabazi’s homeland of Rwanda to Halifax. He left his war-torn country in 1994 for Zaire, now the Democratic Republic of Congo, and then Namibia where he spent almost nine years before arriving here in 2005.

Simon used his industriousness and knowledge from his forestry degree to become self-employed supplying firewood to refugee camps. In Zaire he formed an organization called Protectors of the Environment, spearheading efforts to use efficient stoves that reduced firewood consumption by 70%.

You feel good when you’re contributing.

Simon worked with farmers and on forestry projects, became a plantation manager and the Program Director for Community Forestry in North-Eastern Namibia. He couldn’t get a Namibia work permit, and not wanting to live as a refugee forever, decided to leave. “They let me work without a permit, but I didn’t want to hide. I have the skills and knowledge to live my life in a dignified way.”

Simon, his wife, Daphrose Nyiraminani, daughter Simone, then 12, and sons Simon, 9, and Jordan, 2, left for Canada, along with a nephew who has since moved west. “It is a big challenge to come here when you know nobody,” says Simon. “We had family back home and friends in the Congo and Namibia. We had a community of people.” He considers it fortuitous that Immigrant Services Association of Nova Scotia was here to help him and alleviate his worries. And he had many – finding work,  accommodation for his family, and whether his children would have a place in school and make friends.

“I didn’t want to depend on handouts, but Immigrant Services Association of Nova Scotia filled the void of what I needed.” He registered in English for Work and Business, (he also speaks French, Portuguese, Swahili and other African dialects), and through the Work Placement and Mentorship programs, he built his resume. A 2006 job placement at the Nova Scotia Department of Natural Resources resulted in his current position as Woodlot Education Coordinator, focused on woodlot management. “You feel good when you’re contributing.”

Immigrant Services Association of Nova Scotia helped his wife find food handling, sign language and other courses. She is a life skills worker in group homes and, when requested by Immigrant Services Association of Nova Scotia, helps new immigrants. She also is a substitute teacher, while their daughter attends university and sons go to school. Simon considers it important to continue
learning and completed a Master’s in Adult Education at St. Francis Xavier University.

The family became Canadians in 2011 and, while they continue their African traditions, they have settled well and find the lifestyle appealing. “When I was first here a vehicle stopped and waved me to cross the street,” Simon says with a laugh. “I had to call my friends at home to tell them and they thought I was lying!”

But he admits that the immigrant experience takes hard work. “You have to embrace the changes, bring what you know, accept the norms of the new place and marry the two.”