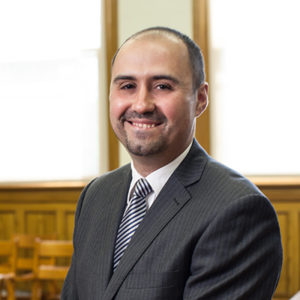 One might not expect to find a lawyer from Bulgaria in the Annapolis Valley, but Plamen Petkov is happily settled in the small town of Kentville where he is a partner at Taylor MacLellan Cochrane, an active volunteer, and supporter of immigrants.

Plamen left home in 2002 to study law at the University of New Brunswick. He had already completed the study course for his Master’s in Law in Bulgaria – five years’ study after high school – but the Bulgarian law system is based on civil law and he wanted to also study common law. “UNB had high rankings. Their admission staff was helpful to me coming from another country.” And once he earned a scholarship, it became an easy decision. His first night was unforgettable arriving after dark to an apartment without electricity. But – thanks to the superintendent’s Bulgarian wife – there was at least a bed. Plamen found the campus welcoming and his wife joined him soon after she had completed the study course in English philology at the University of Sofia. Their son was born in Fredericton; later followed by two girls, now seven and four.

Plamen articled for a year in New Glasgow before moving to Kentville. “I came from a town of 70,000 people in Bulgaria in an agricultural area. It didn’t feel that different for me going to these small towns.” Plamen practices litigation and commercial law but has a particular interest in immigration law. “I felt a connection to people going through the process.” He is also on an immigration steering committee helping to integrate and welcome immigrants to the Valley, often working with the King’s Volunteer Resource Centre and the Immigrant Services Association of Nova Scotia office in Kentville.

Plamen, who speaks Russian, Serbian, and Bulgarian, also volunteers with the Halifax Refugee Clinic. “In Nova Scotia there’s no legal aid for refugee matters, so the clinic fits that need. As a lawyer if you want to be in a situation to literally save someone’s life, refugee cases offer a good opportunity. Often if a person doesn’t get through the refugee process they might be sent back to their country and killed.” His own immigration process went well, partly because his English was good. “For us it was smooth sailing, but you read the law and decisions from the court reviews of visa officers’ decisions, and you see that the process can be draconian and harsh with no recourse for people.”

Plamen has no plans to move. “I have friends here; the people I work with and meet are friendly and nice. I love the Valley. It is beautiful. We follow the harvest as the u-picks open until late October.” The family also travels around the province and to Ontario. Plamen is a passionate vegetable gardener. “Doing two hours of hard work in the garden is relaxation after a hard day in the office.” The family went to Bulgaria last summer to visit his brother and family. He found many of his friends have moved on, some to England, so life in Bulgaria has changed. Plamen has learned that settling is a gradual process but when they returned to Nova Scotia everything felt “familiar and homey.”