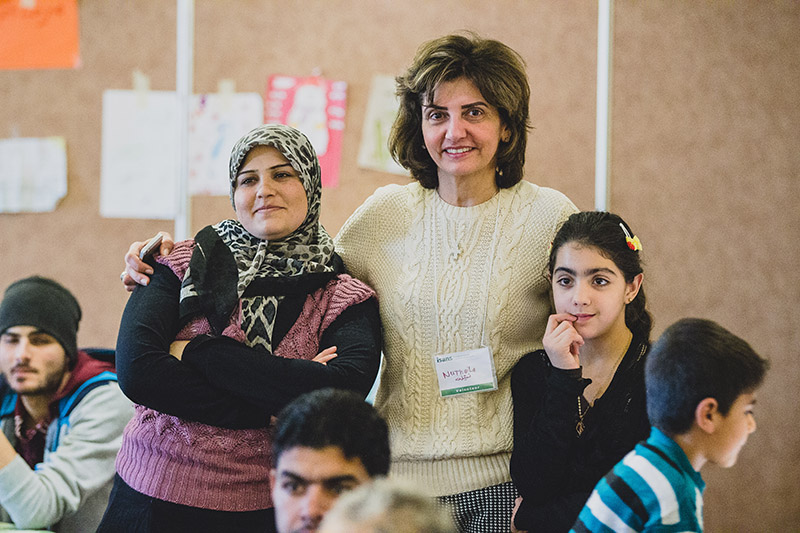 April 10-16 is National Volunteer Week in Canada, and we have many people to thank this year!

As ever, we are grateful to those who donate their time and energy to help us deliver our programs and services. We could not do it without our volunteers, and it has been especially evident in the past few months.

We recently held an Volunteer & Staff Appreciation event to say thank you to all those who have helped in the first phase of the Syrian Refugee Initiative. With the help of staff, volunteers, partners and friends we have welcomed over 700 government-assisted refugees to Nova Scotia.

When the federal government committed to bringing 25,000 Syrian refugees to Canada, towns, communities and individuals offered to help and wanted to know what they could do. When the calls became to much for us to handle 211 stepped up. They directed calls, answered questions and patiently responded to the incredible range of offers that came their way. We can’t thank them enough.

Volunteers sorted clothes and mugs, bicycles and blankets, toys and toothpaste. They served food, interpreted, rocked the babies, played with the children, went shopping, accompanied people on the bus, played soccer and chatted with people. Welcoming 700 new Nova Scotians would have been impossible without the volunteers, and we want to thank each and every person for their compassion, commitment and kindness.

We also want to thank Joe Ramia and George Armoyan who so willingly agreed to allow us to use the old Rona building as the Donation Centre.

We want to thank EMO, especially Bill Hatter, for expertly managing the Donation Centre where we received 4000 bags of clothing.

We want to thank the staff from the Best Western Plus Chocolate Lake Hotel, who were so warm and kind, going the extra mile to meet the needs of the refugees.

We want to thank the staff of the YMCA who worked with the school aged children in the hotel – they were a true partner.

Thank you to the physicians of the Transitional Health Clinic for Refugees who saw to the care of 692 people. Little did we know, when the clinic opened only a few months ago, that we would need it so desperately. 18 physicians on a rotating basis completed those 692 health assessments, made referrals and set the refugees on the path to accessible healthcare.

We want to thank the staff of the Discovery Centre, the Halifax Libraries, the Chocolate Lake Community Centre, Soccer Nova Scotia and the Emera Oval who welcomed us with open arms. And apologies for the snow boots in the gym!

To all volunteers, we at ISANS, the community, the province and the country owe you much. Thank you!

Check out some photos below of our volunteers over the past few months.