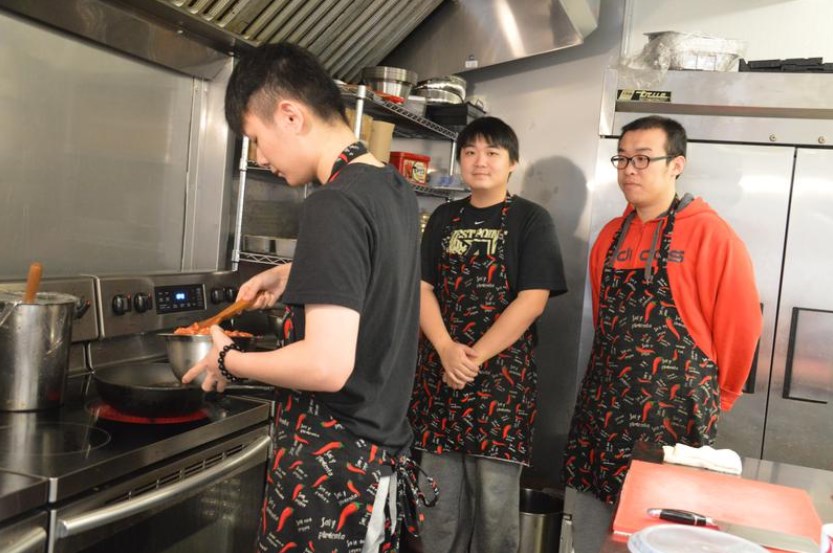 SYDNEY, N.S. – A new restaurant on Townsend Street is boasting authentic Chinese dishes unlike any found in Cape Breton.

Bai Wei Grill Bar opened three months ago and is owned by Wang Hong who lives in Halifax. In 2012, she opened a restaurant with the same name there, with help from the Immigrant Services Association of Nova Scotia.

An experienced business owner from China, Hong was featured in a video promoting the association’s services. In it she said the recipes used in the Bai Wei restaurants have been in her family for generations.

Chen Yu Yao and Wei Fan Duan, both Chinese nationals who came to Canada to do their business degrees at Dalhousie University, were transferred from the Bai Wei in Halifax, to run the one here.

“We want to introduce Chinese food to everyone,” said Yao, 29, who is the restaurant manager and one of the cooks.

“Because there is lots of (Chinese) students here who go to CBU, the taste is more like home,” said Duan, 25, assistant manager and another cook.

So far business has been better than projected even though no marketing has been done. The Sydney location doesn’t even have a Facebook page yet.

Yao and Duan think this early sign of success is because food at Bai Wei is more authentic than other Chinese restaurants in the area.

“The owners of other Chinese restaurants may have (been) here for a long time so their food is localized. It’s not like real, traditional Chinese food,” Duan said.

“And also our food is served a bit faster than other places. When we first came here, the wait time (at other restaurants) was a little long (to get food). Most of our dishes are a bit faster (to prepare) than other (places.)”

Grilled quail, marinated pork stomach and ears and eel don are some of Bai Wei’s specialty dishes. Ingredients for many of their items have to be ordered from specialty shops in Toronto.

“Things like the pork stomach and the beef stomach, local people won’t be into them that much. But Chinese people, we eat different kinds of stuff,” said Duan.

The restaurant’s target market is Chinese students who are studying in Cape Breton. This is part of the reason they have menu items that are quick to cook, so students can have a quick bite before heading to campus or to take with them.

People can eat-in or take out the food. There is no delivery but Duan and Yao say they may add this in the future. Right now, they think they are busy enough as they get used to running the new restaurant and don’t want to bite off more than they can chew.