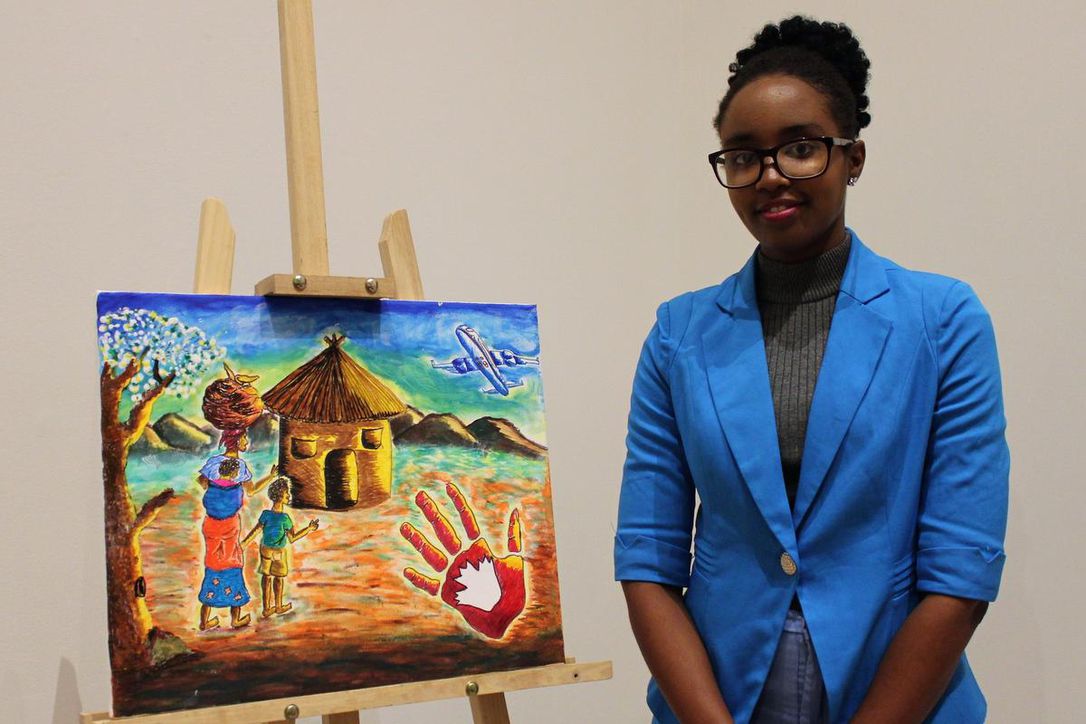 HALIFAX—Youth from Halifax and around Eastern Canada gathered at the Art Gallery of Nova Scotia Saturday afternoon to talk about their experiences as refugees, and show off the art they’ve created to express their complex journeys.

Collaborators from a slew of immigration settlement organizations, non-profits and universities in Halifax accepted five youth in the area to participate in the new program, which culminated in Saturday’s exhibit of photography, paintings, poetry, and story-telling.

Project co-ordinator Louise Hanavan said the group met bi-weekly over the past year for workshops on social justice, activism and creative expression. They also had lessons with a professional photographer.

“Photography has really been a tool for them to share their experiences,” she said.

They shared with each other — peers who had faced similar migration challenges, and who continue to face similar settlement challenges in Canada.

“I think to hear other people going through the same thing is really powerful,” Hanavan added.

On Saturday, they also shared their experiences with an audience of close to 100, including several youth from Montreal and New Brunswick who had participated in similar programs.

Chadia Kayinamura, 23, was one of the young Halifax-based immigrants who shared her art. Kayinamura was born in Congo, but spent 17 years in a refugee camp in Uganda before immigrating to Canada last July.

She said it’s tempting for refugees to idealize their arrival in a country like Canada after years without citizenship, without security.

“When we reached Canada, probably most of the time we think that’s the end of the story,” she said.

“But when we get here there is a new challenge that we have to begin, and we have to build our dreams, the dreams that we were living back home.”

Her dream is to become a nurse (she’s been studying for the past six months in the licensed practical nurse program at Université Sainte-Anne) and provide health care to other refugees.

In addition to taking a series of photographs that expressed her immigration journey, she also created a painting inspired by her time in Uganda.

“So it’s like a story of a mother coming from maybe the market … with her children, one in a bag and one walking. And then seeing that airplane in the sky, thinking maybe like in their journey they are going to reach their destination where they’re going to go to change their place,” she said, describing the painting.

In a corner of the painting is a red palm with a white maple leaf — Kayinamura’s symbol of a welcoming Canada.

Researchers from the Child and Youth Refugee Research Coalition spearheaded the project with the aim of empowering youth to tell their stories.

“(The project) has a bunch of sort of shared goals,” said Hanavan. “One of them is to ask ourselves as researchers: what is it that gives youth voice, what is it that can be gained through participating in art for youth whose voices don’t normally get heard?”

El Jones, a local artist and activist who MCed the event, believes it’s essential that Canadians hear stories of the immigrant experience, not just at the moment of their arrival, but continuously.

She said art is a great way to understand someone’s story and identity more deeply.

“When people become refugees, as that label, you lose your language, you lose your place in society, you lose your qualifications, you lose all these things. So part of the project of giving people a camera so they can still tell their story even if they don’t speak English, they can still be an artist, even if you’re not seen as being who you were in the country that you came from,” she said.

She added that art pushes people to rethink some of the “very simple narratives” around the refugee experience.

This project, said Jones, is unique in showcasing the voices of youth, who aren’t often included in the public dialogue around migration issues.