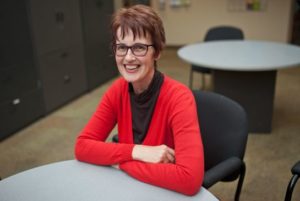 From leading an initiative to ensure gender-neutral washrooms at Dalhousie University to more than 20 years volunteering with immigrants, Gaye Wishart is all about creating welcoming environments.

The Halifax resident was nominated as a Halifax Hero by Immigrant Services Association of Nova Scotia (ISANS).

“Gaye has been volunteering with us and (the) Red Cross and many other organizations…for many years,” said Darlene MacInnis, Practice Interview Co-ordinator at ISANS.

“She is an advocate, a community builder and much more.”

Prior to her 2014 retirement from Dalhousie University, Wishart was well-known for having recruited, hired and trained thousands of employees throughout her career.

Her involvement with ISANS spans more than 20 years. She used her professional experience to help new Canadians with many things, including conducting practice interviews.

“I was doing them with people coming in looking to get some experience in the HR setting and giving them feedback and doing a little mentoring,” Wishart said in an interview.

Over the years she conducted workshops on interviewing skills, and is featured in an online video still used as an ISANS training tool.

Among her volunteer tasks she also offered a course for new immigrant entrepreneurs.

As a retiree, Wishart is on the advisory committee for a Status of Women project called Moving Up Under-Employed Immigrant Professional Women. She continues to do regular practice interviews for immigrants at ISANS. Due to high demand for the service, she and a colleague have paired up to offer the workshops to allow more people to participate.

“It’s great. I love the amazing people that you meet,” she said.

“They’re so well qualified, so just to give them a hand up and some orientation to some of the HR practices that they may not be familiar with in the Canadian context and giving them some feedback. With that feedback you can see them improve within the sessions.”

Other past volunteer experiences include chairing the Avalon Sexual Assault Centre board for many years. During her time at Dalhousie, Wishart was also actively involved in many university community activities.

Those included the Allies Steering Committee, Pink Day, Pride Parade, the White Ribbon Campaign, the United Way, the United Church Chaplaincy Committee, and the University Children’s Centre Board. She was recognized for her achievements with the Dalhousie Community Award, and the DPMG Outstanding Achievement Award.

She was also behind a 2012 initiative that saw the installation of gender-neutral washrooms on the Dalhousie University campus.

“That was a great initiative. It was not difficult in the least to have done. You just need to be a little creative,” she recalled. “We met no resistance at all and we had them running from one end of the campus to the other.”

She said the initiative was a no-brainer.

“When you’re sitting and you’re listening to a trans person saying ‘I haven’t been to a washroom in a school since I started Grade 9’ because they were so afraid, that touches you,” she recalled.

“And you think ‘That can’t be right. We have to be able to do something about this.’ The Allies took that on and it was great.”

In addition to her current volunteer work with ISANS, Wishart is co-chairing a $150,000 fundraising campaign for her church’s new roof in addition to other church work.

She also serves on an ad hoc committee for the Red Cross Humanitarian Awards.

“I’m glad to be able to make a contribution and I get as much back from the volunteer work that I do,” she said.

“It’s a real privilege to be part of making the community a better place and a more welcoming and inclusive place for people.”