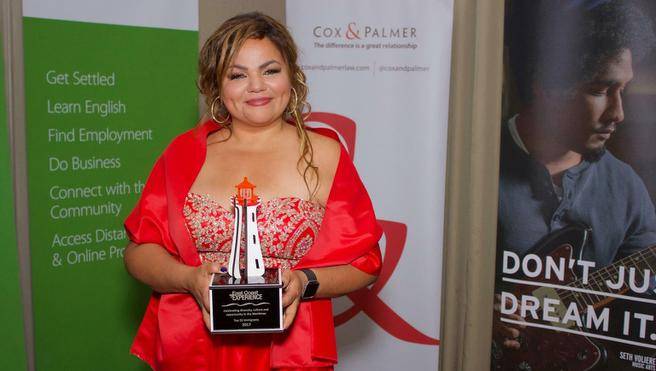 If you don’t find Ghada Gabr behind the counter at her pharmacy in Clayton Park, you might find her at the hockey rink watching one of her sons play, or at a local cafe studying to upgrade her pharmacist credentials.

Since arriving in Halifax from Egypt in 2000, Gabr has been building a successful career and giving back to her new community whenever she can. As the owner of one of the province’s busiest Shoppers Drug Mart stores, her store in Clayton Park not only employs 70 full- and part-time employees, but serves 30,000 people, including several Syrian refugee families.

“I have one of the most diverse stores in Halifax,” said Gabr in a recent interview. “I represent Halifax in my store.”

Some of her employees are from Russia, China, Pakistan, as well as Syria. Her pharmacy was the first, she said, to hire a refugee as an overnight pharmacy assistant. Having staff who can speak Arabic is helpful for her store’s customers.

“All of them are very hard workers,” she said of her diverse employees. “I just have an open mind and see the potential in people.”

For her contributions to the community, Gabr was recently named one of the Top 25 Immigrants in the Maritimes by My Halifax Experience magazine.

“I’m trying to make a difference for my community,” she said.

Gabr works with the Immigrant Services Association of Nova Scotia (ISANS) to help internationally-trained pharmacists prepare to work in Canada. She also often offers newcomers to Halifax work placements in her store as cashiers, cosmeticians, pharmacy assistants and pharmacists, through the help of ISANS.

Since 2000, when she and her husband Ahmed Elgallad arrived in Halifax with $600 in their pockets, she has seen several positive changes and credits Nova Scotia’s government for helping immigrants. She points to its START program, which offers financial incentives to small and medium-sized businesses to help them hire Nova Scotians who need work experience.

“I think the government is moving in the right direction now,” she said. “We can change people’s lives.”

Gabr is exactly the type of immigrant Nova Scotia wants to attract: smart, hardworking, entrepreneurial, and not afraid to try new things.

“I am definitely a risk-taker,” she said. “New challenges are very exciting to me.”

Raised in Port Said, an Egyptian city at the northern end of the Suez Canal on the Mediterranean Sea, she earned her pharmacy degree from the Suez Canal University. After her husband received a scholarship to do his PhD in engineering at Dalhousie University, she and their three-month-old son moved with him to Halifax. While Ahmed was at school, she would take their son to free English classes. When her English improved, she applied to do her master’s of health informatics at Dalhousie.

In June 2002, her second son was born. By that time she had completed two of the exams she needed to get her pharmacist licence in Canada. The following year she got her licence and in 2004 she graduated with her master’s degree. While working as a pharmacist at the QEII Health Sciences Centre she also worked on Sundays at the Shoppers Drug Mart in Bedford Place Mall. When the store’s owner recognized her leadership potential and suggested she take a leadership excellence program offered through the company, she did.

Recruited to work in Ontario, she opened her first store in the Ottawa area in 2005. Wanting to make sure it was the right decision, she moved to Ontario first and six months later her family came.

“The rest is history,” she said.

She took on the operation of a second Shoppers Drug Mart in 2006 and before long had a third store, all of them located in the Ottawa Valley area. Life was good in Ontario. Her third child was born. But after nine years there, she and her family returned to Halifax, a place that felt like home.

“Everyone is so nice,” she said of the city. “Most importantly, everyone is equal.”

They returned to Halifax in 2016 after her husband got a job he didn’t want to turn down as a senior engineer with Nova Scotia Power. At the same time, the store in Clayton Park was available. Gabr was chosen from among 30 qualified candidates to be the new owner.

Embracing the move to give pharmacists an expanded scope of practice, Gabr doesn’t stop acquiring new certifications and skills to improve the services she offers her customers. When she’s not at her store, where she still works three or four shifts a week in the pharmacy, you might find her in the upstairs seating area at the Bedford Basin Farmers Market, sitting by a window, studying on her laptop.

“I love switching things around,” she said, referring to the variety in her job.

With her bubbly personality, long, dramatic eyelashes, and brightly painted and jewelled fingernails, it’s hard to imagine Gabr hidden in a back office.

“I’m always walking the store and talking to customers. I don’t stay behind counters,” she said.

Earlier this year, Gabr’s pharmacy was chosen as one of 40 in the province to be part of a pilot project aimed at reducing the workload of family doctors and improving services for patients. Called the Community Pharmacy Anti-Coagulation Management Demonstration Project, it is a partnership between the Pharmacy Association of Nova Scotia, Doctors Nova Scotia and the Nova Scotia Department of Health and Wellness. It aims to help patients in the prevention and treatment of thromboembolism, the obstruction of a blood vessel by a blood clot.

Having arrived in Canada with little money and working hard to create a good life for her family, Gabr is eager to give back to the community. Last year, she and her employees raised $12,000 for the IWK Health Centre in support of her store’s front manager, who was diagnosed with breast cancer. They also raised $2,000 for Adsum For Women and Children.

Knowing she is a role model, not only in her community but for other immigrants, Gabr admits that while it is difficult, with hard work many things are possible.

“It isn’t easy. There are a lot of roadblocks in your way but you have to just keep going.”