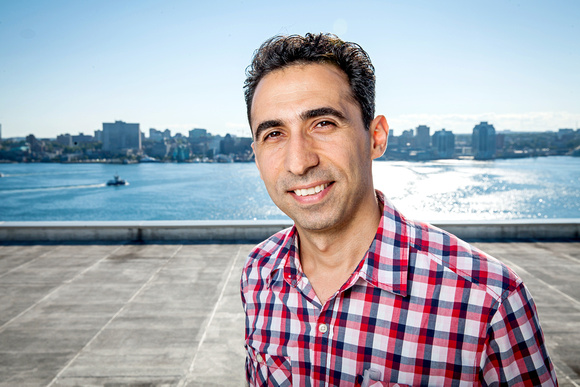 Amir Nafez’s journey to realize an ambition of settling his family in Nova Scotia came with more than a few hurdles – he faced recertification training, finding a job, as well as navigating the Canadian work environment and culture.

After the professional engineer, his wife and young son left Iran two years ago, they found their way to Canada, first to Manitoba, then moving to Halifax where Amir sought help to re-establish himself in his field.

He connected with the Immigrant Settlement and Integration Services (Immigrant Services Association of Nova Scotia) for help.  Through its Internationally Educated Engineers (IEE) Bridging Program, the organization worked with NSCC to set up an engineering competency assessment work placement for Amir under the supervision of a Mechanical Engineering Technology program faculty member at Waterfront Campus, Dan Bolivar.

“The mentoring through the work-based competency assessment opens minds to new faces and new ideas and new ways of doing things and, in turn, the workforce becomes more reflective of the community.” ~ Mohja Alia, Immigrant Services Association of Nova Scotia

“From the outset I thought, ‘I’m going to help him get a job,’” says Dan. He spent the next three months offering the support required for Amir’s internship. This included a design project, completed thanks to Amir’s hard work and the support of Maritime Paper. An additional workplace experience and six more months of on-the-job experience were needed and, with Dan’s help, Amir found his next opportunity at Stantec in Dartmouth.

Mohja Alia, the manager for Employment and Bridging programs at Immigrant Services Association of Nova Scotia, says that integrating immigrants into the workforce is not only a learning opportunity for the individual, it also helps to open the employer’s eyes to the cultural diversity and skills the person can bring to the organization. “The mentoring through the work-based competency assessment open minds to new faces, new ideas and new ways of doing things and, in turn, the workforce becomes more reflective of the community.” 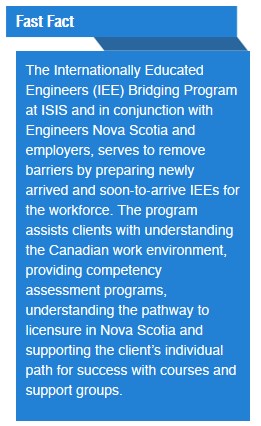 Dan agrees. “It was a great fit. Amir was so nice to work with, collegial with staff and students.”  He adds, “I wanted him to succeed, he wants to succeed. It’s a recipe for success.”

While Amir’s second language is English, he has been busy learning its nuances and many new words, along with new software and a new culture.

“I thought of heading to Ontario because the job opportunities are more plentiful, but my family and I want to settle in Nova Scotia,” says Amir.

And he’s on his way to making that dream a reality. Now that completing 12 months of supervised hours is in his sights, Amir’s next step will be to write the professional engineering exam.

Dan is certain Amir will succeed. “He is serious about the required learning process and is willing to prove himself – I know he is just going to rocket along.”