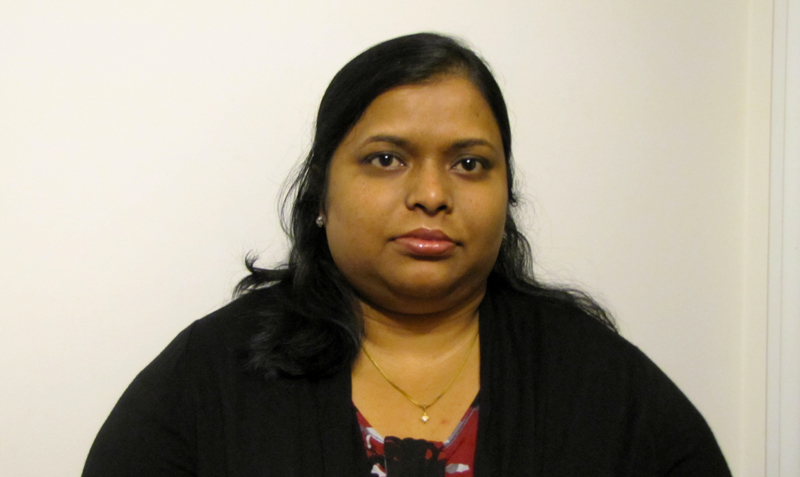 Suguna Kakara immigrated to Nova Scotia from India with her husband in 2004.  He had worked in Halifax previously and assured her that it was a beautiful city with friendly people and that she would be very happy.

It was an emotional time for Suguna, as she had to leave her loving family behind in India and had no connections in Nova Scotia except for her new husband;  not only that, she also had to leave her job in information technology and her new home which she had recently furnished.  She had never before anticipated living abroad and now this was to be her reality.

At first, she found it hard to adjust to the quiet of the city.  She had come from a big, busy city in India, and had not expected that a capital city like Halifax could be so quiet and feel so small.

After the birth of her first son, she would visit a local park for hours just to be around people, hear sounds of the city and to feel more alive and less isolated.  She began to really love the city and its more relaxed lifestyle.  She felt excited to raise her children here.  She did, however, miss her work greatly and began to think about starting a new career in Halifax.

In 2006, Suguna began working at Keane Canada in Halifax.  As when she first moved to Halifax and had to adapt to the atmosphere of the city, she now had to adapt to the workplace culture of Keane and found the differences challenging at first, particularly making small talk and socializing with her new coworkers.  She constantly doubted herself and would worry “What should I say?” in her head.  For a while, she was silent, not able to let her talkative, friendly and vibrant personality shine through.

Eventually, Suguna was able to overcome these challenges and this past December, was promoted to Senior Consultant at Keane.  She now has two sons and she and her family continue to enjoy their happy life here in Halifax, the city she now calls home.