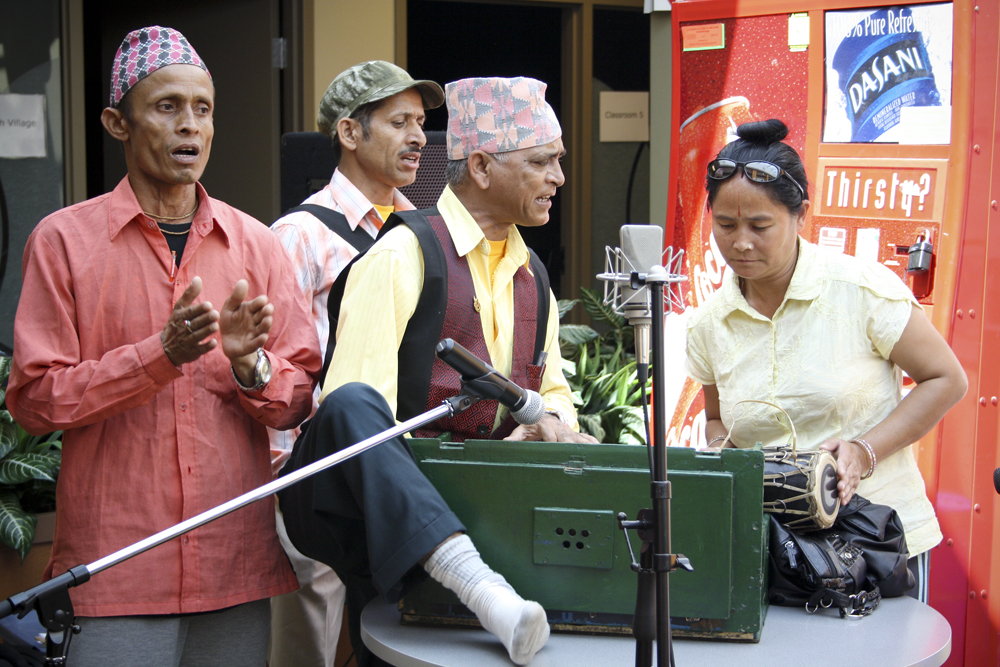 We all love music. Music is a shared experience, it brings people together and lifts them up. Everything around us has rhythm; music is a melodic and rhythmic record of life. Music can capture a moment in time –  it tells the story of who we are and where we come from. When we can’t carry home with us, we carry it in the memory of a song hummed to us by a loved one.

The Community Connections program hosted its first Connecting Through Music event on August 10. Our clients gathered together and played their favourite music and shared the stories behind their favourite songs. There were musical representations from Iran, India and Nepal. The inaugural event was for clients only but we would like future events will be open to the public. We would like to to foster musical creativity and encourage fusion of culture and style to celebrate diversity.

The event opened with young Bollywood enthusiast Kruti Jaipuria Morya, who played songs on her keyboard with such confidence one of have thought she was much older! She has also performed at the Indian Festival in Halifax and loves sharing her music with others.

We heard traditional Nepali music played on harmonium and drum. The songs were wonderfully enchanting, and were only made more surreal by the fact that the expert harmonium player Laxmi Adhikari has only one arm, so played the instrument with his leg. His songs were about the bravery of Bhutanese refugees, encouraging them to look forward with confidence. His harmonium belonged to his father, and Laxmi took it up when his father passed away 30 years ago.

We were treated to traditional Persian singing by a renowned performer from Iran. Fariba Davody-Kandorgh sang a song to honor her late teacher and was accompanied by her son Sohrab on the Tar. The crowd was moved as her voice echoed through the atrium. Previous to living in Halifax Fariba ran a music school in Toronto – she hopes to open a similar school here one day. Sohrab has been playing the Tar for 15 years and also wants to teach.

Listen to Fariba and Sohrab:

Next Harka Maya Dhungana and Moti Maya Subedi sang a traditional Nepali song that described how beautiful and handsome the women and the men looked in their traditional dress and Dahka topi hats.

This was followed by a trio performing Persian and Kurdish music. Mohammad Ali Zandi is a professional musician and teacher from Iran. He played the Divaan a traditional Persian string instrument that was played by courtesans in the ancient Ottoman Empire. He was accompanied by Irog, who played another traditional string instrument, and Roya who played the Daf a traditional Persian drum. Their songs were about love and the beauty of Iran. They also played a traditional Kurdish song which had very different rhythmic patterns, and the audience joined in for the chorus in Farsi/Kurdi. Mohammad was delighted and said “most days since I came here I don’t feel like myself but when I play I feel like myself.”

The event was a huge success and all of the songs were recorded by ISANS volunteer Dave Ewenson. Check out the gallery below for photos from Connecting Through Music.