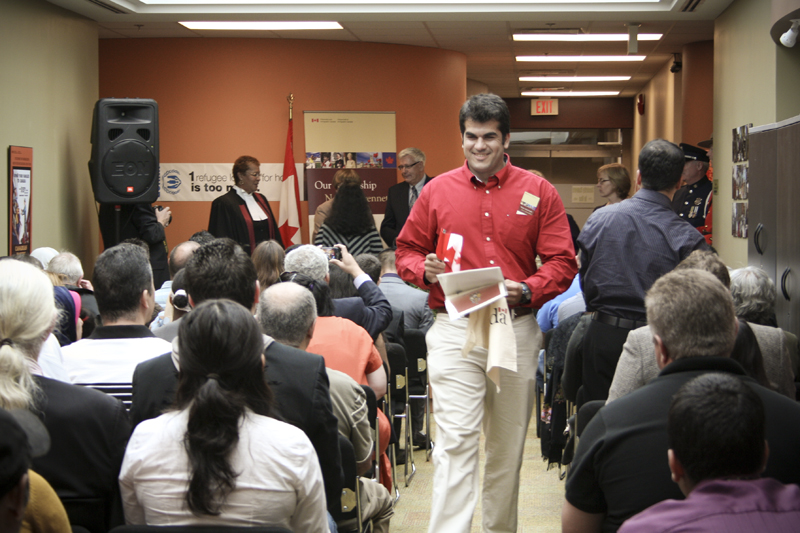 On September 8, 2011, we held our second Citizenship Ceremony here at ISANS. 25 immigrants from 15 different countries were sworn in as Canadian citizens as family and friends looked on. The new Canadians are from Bangladesh, Belarus,China, England, Egypt, Jordan, Kuwait, Lebanon, Netherlands, Rwanda, Saudi Arabia, Switzerland, Taiwan, United States Of America, and Vietnam.

The citizenship ceremony is a celebration of a choice made by many immigrants to take on the responsibilities and rights of being Canadian. Immigrant Services Association of Nova Scotia works with new immigrants, both before and after they arrive in Nova Scotia. For many of our clients, the citizenship ceremony marks the beginning of a new phase of their lives in Canada.

“It is always humbling and moving to witness a Citizenship ceremony and to be reminded of the strength, resilience and promise these new Canadians bring to Nova Scotia and our communities”, says Claudette Legault, Director of Programs and Services.

In the first quarter of 2011, over 61,000 people became Canadian citizens in over 700 ceremonies across the nation.  Last year, a total of over 140,000 people took this step.  In Nova Scotia, 1, 038 people became citizens in 2010. According to the Organization for Economic Cooperation and Development (OECD), Canada leads the world in the share of foreign residents (living here for at least ten years) who become Canadian citizens, with almost 90% for 2010.

Thank you to everyone who made this event possible!